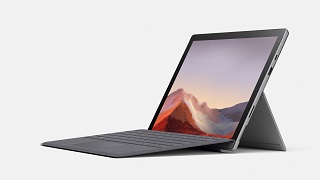 Microsoft has recently released the Microsoft Surface Pro 7 Plus range.

The latest release from Microsoft includes some minor internal device changes, including to the hardware specifications and internal layout of the device, but there is no discernible changes to the look and feel of the device, being packaged into the same 12.3 inch tablet style device of the Surface Pro 7.

So if it doesn’t look or feel any different, what are the changes, and why should you consider getting one?

The key updates to the hardware include:

A new generation of Intel processor

One of the biggest changes (And possibly highest value) to the Surface Pro 7+ is the inclusion of a removable solid state drive (SSD/Storage). The purpose of this isn’t necessarily to upgrade the storage of the device, but for IT administrators to be able to decommission devices at the end of the asset lifecycle. As opposed to manually wiping storage of each individual device via the screen, IT administrators can now remove the SSD and plug them in to a drive bay for wiping, saving huge amounts of time in the decommissioning process.

The Surface Pro 7+ now comes with an LTE option. For the uninitiated, this is mobile broadband. It includes a SIM card slot to make the device mobile broadband capable. At time of publishing, this only includes the ability to connect to 4G data networks.

This is a critically important change to the line up. Yes, you can purchase a Surface Pro X with LTE capability already, but the ARM processor will limit the applications that will work on the device. The Surface Pro 7+ with LTE overcomes this challenge by including an Intel processor which supports almost all desktop applications designed for Windows devices.

How to get one

The Surface Pro 7+ has been released for commercial and education only, meaning you need to buy them from a Surface Business Partner - Such as ServiceScaler - or Microsoft directly.

There’s never been a better time to acquire a Surface Pro and ServiceScaler is here to help.

To learn more about the Surface range of products, feel free to reach out to the team at ServiceScaler who can assist you to make the right decision on a Surface product.